Abaana meets with around 200 children on the streets every week through the Street Reach program.  We play games, tell bible stories, give basic medical care and provide a good meal.

At Street Reach often we find boys lying along the side of the banks of the field sleeping or sniffing petrol or glue. We noticed one boy lying under a tree and in considerable pain. After getting his friend to translate for him, we discovered his name was Charles and that he was suffering from severe stomach pains. After further questions it was felt this was more than a bad case of food poisoning and the decision was taken to get Charles to hospital.

On arrival it was discovered that Charles was suffering from Appendicitis and without treatment, within hours, would die from his appendix bursting. We were able to provide the two million shillings necessary for Charles' treatment and the operation was a success. Even more amazing was that the following day contact was made with his aunt who agreed to take him in once he left hospital so that he would no longer be on the streets. 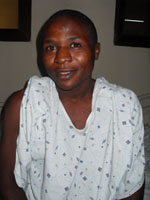 Every week hundreds of children attend our Street Reach program with similar stories. You can help these children get off the street and into homes where people care about what happens to them.

Our long term goal is to get as many of these children off the streets as possible and into good homes but until this happens we want to make sure that we provide help and support to these children while on the street. With the help of Fast4Africa money we aim to give these children regular vitamins, medical care and a good meal. Over the next few months Abaana would like to look into the possibility of having a "safe house/ shelter" for some of the children that have nowhere to sleep. Children who are not ready to come off the streets, but still spend every night in fear that it will be their last.

Created and Designed by RTNetworks

Fast4Africa is run by Abaana - a charity for the children of Africa.
Charity Number XR23 866